The advantage of being a student in a collegiate setting, apart from the basic benefit of continuing your education, is the access to events and people that you otherwise would not encounter in your daily life.  This past week, that was the presence on my university’s campus of a group of Tibetan monks, who were creating a mandala, and making other presentations about Tibetan culture and the Buddhist religion.  Rather than try to sum up in my own words why the monks are touring the world, I’m going to quote from the brochure/flyer/fund-raising pamphlet:

A) To make a contribution to world healing and peace by sharing unique Tibetan Buddhist teachings, sacred religious performances, chanting and Tibet’s unique identity treasures of culture and authentic traditions.

B) Recognizing well, and very deeply, that there have been great tragedies in every part of the world, we want to share our sympathy and prayers together with you as human beings sharing this planet and sharing the future of this home of ours.

C) To generate a greater awareness of the endangered Tibetan civilization and human rights abuse by the Communist Chinese since 1959.  As the situation in Tibet is becoming more desperate by the day, due to massive displacement of Tibetans by Chinese citizens sent there by the Communist government, and ever new rules and difficulties, especially at the monasteries, we need your help now.

D) To raise support for the refugee monks’ community in south India for proper food, improvement in  health & hygiene and for providing better education facilities for the monk students.  We preserve our tradition and culture.

It’s quite unlikely that my university is the only place in town they’re going to be making their presentations and demonstrations, but the chances of my even finding out about any other such demonstrations are low, let alone finding the time to go see them.  And even if I had, I doubt that in other settings, I would have gotten to be so close to the mandala creation process:

The closest thing in my previous life experience to this would be Native American sand-painting, which I’m fairly sure I did see demonstrated back when I was a teenager.  (I spent several summers at a camp in the Four Corners region of the American Southwest, and the camp had close ties to the Navajo Nation, and we also visited a number of pueblo tribal centers, too.)  Unfortunately, that was a very long time ago, so I don’t remember how it was done, precisely, but I’m quite sure it was nothing like this.  (I want to say it was less tool-based and more by-hand, but…I’m not sure that’s at all right.) 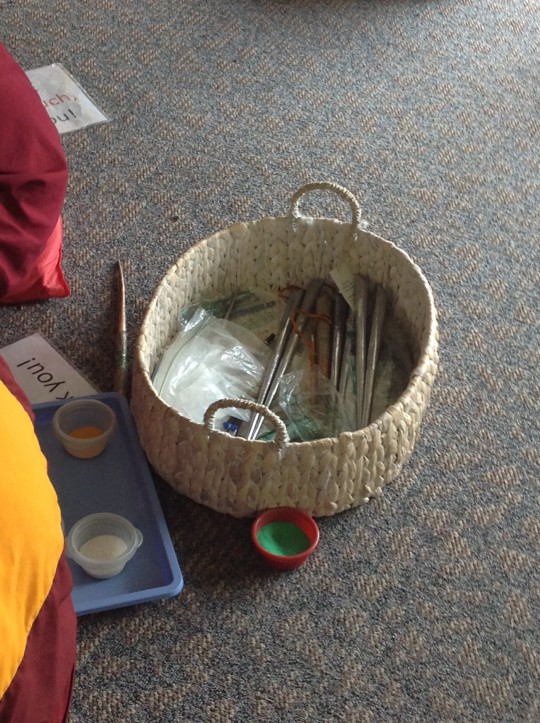 The tools they were using were quite fascinating.  They were basically very delicate funnels, which they would fill with sand of the appropriate color, and then they would gently encourage the sand to come out in a steady fashion by rubbing an empty funnel along the side of the funnel.  This created a constant ringing sound as they worked.  I shot a short video clip to capture the sound, but WordPress doesn’t seem to support the file type (or maybe it only does if I upgrade my account?) so you’ll have to click here to go watch it if you’re interested.  The video was shot about 2:30, and shows how much more they had finished in two hours.

By 3:20, when I was starting to think I should reluctantly begin the process of getting myself ready to head over to my 4:00 class (yeah, it takes me a while to actually get moving), the mandala was finished, and had been raised up onto a table so it could be viewed more easily.

Notice how it has symbols for all the major world religions?  I like that.  Peace can only come from tolerance, and that’s part of their message.  I just wish more people would embrace that message.

I was taking all these pictures with my iPad, so the quality is not the best, but I would have felt awkward dragging my camera (which is a big, serious camera, not one of those little ones you can fit in your purse) all the way to campus, since I couldn’t feel sure I wouldn’t be told “no photography” when I got there.  (Technically, if I’d known about this, I could have made sure photography was okay on Tuesday, since they were already on campus on Tuesday, but the e-mail with the header “Tibetan Monks on Campus” only went out on Wednesday.  Because that makes so much sense.)  Anyway, I felt a little silly and awkward taking all these pictures with my iPad…until I saw one of the monks taking a picture of the completed mandala with his smart phone.  (Or a smart phone, anyway.  I suppose it could have been someone else’s and he was just borrowing it.  But I suspect it was probably his.  The monks need a way to contact the monastery back in India, right?)  Part of me wishes I’d taken a picture of the Buddhist monk using a smart phone to take a picture, just for the sheer incongruity of costume and modern technology, but…that would have felt like invading his privacy.

I’m sure there was at some point a presentation explaining the meaning of all the symbols in the outer register–the white conch shell has to do with the history of the original Drepung Gomang Monastery in Tibet, for example–but that was probably part of the “Closing Ceremonies” which took place during my class, so I was sadly unable to attend.  (When there are only five students, and the class only meets once a week, you can’t skip class.)

Unfortunately, since I still had a lot of reading to do in between classes (not to mention my Thursday myth to write, short as it was), I wasn’t able to spend much time in the room where the monks were working on the mandala, so I don’t really have much else to say here, which makes me feel rather like a failure.  Though I should admit that this was a bit of a mental eye-opener; though I still see bumper stickers reading “Free Tibet!” every once in a while, I’d never really stopped to think about how the Buddhist monasteries were having to function outside Tibet’s borders due to the continued Chinese occupation.  Of course, apart from giving them some money to help them keep their monastery going, I don’t really know any way I, personally, can help, either.

Naturally, I did give them some money; I put some money into the donation box, and bought a scarf from the tables where they were selling various goods as a fund-raiser.  (I should have bought something more expensive and charged it; I ended up giving them the last of my cash, which caused me all sorts of problems, including not being able to have lunch today, ’cause I’d forgotten to get more from an ATM, and had naively believed it when I’d been told the museum was closing at noon.  Uh, but that’s beside the point.)

Anyway, I took a lot more photos than just those two, including a lot of close-ups of the mandala, but rather than burden the post with a huge number of pictures, here’s a link to the rest of photos.  Also, the flyer provides a number of web addresses for the monastery.  I have no idea what the difference is between some of them (some are clearly in languages other than English) so I’ll just provide them all, in case anyone wants to learn more about the monastery: