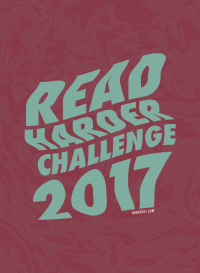 Well, that did not take long to read.  (Helped that things were super-quiet at work over the weekend and I ended up reading on the job ’cause there was literally nothing else to do.)

I picked this for challenge #20 “Read an LGBTQ+ romance novel,” but it would also have worked for #12 “Read a fantasy novel.”  (I’ve got a different book on my list for fantasy novel, btw.  I don’t plan on having any book count for more than one challenge.  Though a lot of them could.  Depending on where one lives, it could count for #10 or #11, but not for me.)  Hannah G mentioned reading this book for last year’s Read Harder challenge, and after I looked up the plot synopsis, I thought it definitely sounded like fun, so this was already winging its way to my house by the time I decided to take part in the challenge this year.  (Or rather, by the time I found the list of this year’s challenges.  I had kind of already decided to do it as soon as I learned it existed.)

So, based on the fact that I read it in three days (started on Friday), you will have likely come to one of two conclusions about this book:  either it’s a real page-turner, or it’s very short.

They’re kind of both true.  Or rather, it’s definitely a page-turner.  It’s not very short, but it is too short.  In that I wanted it to keep going and going and going.  (Obviously, I will be ordering the next book in the series the next time I place an order at a book-selling location!  (But I spent $300 trying to buy some work-appropriate clothes on Tuesday, and donated another $300 to charity on Friday, so I have to cut back on the spending for a while.  Or borrow some money from my folks.  Whichever is less grueling.))

The story, to give an unfairly brief hint, is that Lucien Vaudrey, newly become Lord Crane, has nearly lost his life to a curse.  Having recently returned from Shanghai, where shamans are not uncommon, Crane and his faithful manservant Merrick decide to send for the British equivalent of a shaman.  They get Stephen Day, who has good reason to hate Crane.  But as Day dutifully does his job, using his magical abilities to discover who’s out to kill his client and stop them, the two men become more and more drawn to each other.  (Ack, what a terrible summary.)

So, my biggest complaint other than “I wanted it to be longer, dangit!” is the utter lack of surprise on the part of everyone involved, that both these two men — the near-victim and the one summoned to prevent his becoming a real victim — are gay in a time and place where there are laws against the consummation of such desires.  It’s one of those things that doesn’t bother you as you’re reading it, because you’re caught up in the story and the characters, but after you put the book down, you stop and say “wait, why isn’t either of them surprised to realize the other is also into men?”  I mean, yes, obviously, there wouldn’t be any love story if they weren’t, and I bought it as much for the love story as for anything else, but…it’s really hard to find the words to express what I’m trying to say.  I’ve had the same reaction to some other same-sex love stories, especially those set in repressive times and/or places like this one.  It’s not that Crane and Day aren’t hesitant to act on their desires for fear of discovery — they are absolutely afraid of being caught in the act — it’s just…I guess I wanted a little surprise on at least one of their parts when they start realizing the attraction is mutual.  But, like I said, this isn’t something that I noticed while I was reading it.  It’s one of those “thinking about it afterwards” things.  And it pales in comparison to everything I loved about the book.

The story twists and turns, and never really gives our hapless heroes a chance to catch their breath.  (Which does mean, among other things, that there isn’t actually as much of the “hot m/m sex” the back of the book advertises as one might have liked, but it’s certainly hot enough!)  In the course of the investigation, both characters are frequently left lost or surprised by something the other one already knows or has figured out, allowing almost all the world-building and exposition to come in dialog instead of narration, which helps it feel much lighter and fresher.  (More fresh?  Which is the correct usage?)

I think what catches my attention most is that world-building, really.  (Um, apart from the sex, anyway.)  The preferred term in the book’s world for Day and those like him is “practitioner”.  The terminology, on the whole, was strongly reminiscent of the terminology used by the cult(?) in Guy Ritchie’s Sherlock Holmes, but the terminology is about the extent of the similarity there.  What the world itself made me think of was Jonathon Strange & Mr. Norrell.  (Though I must admit that I’ve only watched the BBC miniseries, not read the book.)  In both cases, you have a 19th century England firmly rooted in the real one (early 19th century in JS&MN‘s case, and probably late 19th century in this case), but with a fully developed magical history, complete with rules and legendary figures, but (unlike in something like Harry Potter) most of the magic is low key, easily mistaken for something non-magical, and tends to follow the guidelines of historic folk beliefs.  Of course, that’s about where the similarities end, especially since the protagonists of this book are much more likable than Jonathon Strange or Mr. Norrell.  (And, terrifyingly, I’ve been told they were less likable in the book than on the miniseries.)

Well, I’ve suddenly run out of steam, so I guess I’ll just cut off the review abruptly there.  Long story short, if you’re looking for a good, entertaining read with a m/m romance in a historical setting, I don’t think you can go wrong with this one.  (And if you don’t want an m/m romance, you probably stopped reading this about 975 words ago…)

Pingback: Looking back on Read Harder 2017 | The Mad Grad Student